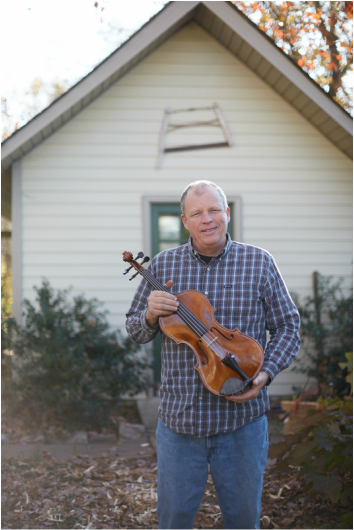 Mike has been making fiddles for over 20 years and a woodworker since childhood.  He loves music and has a passion to create!

The wood Mike uses, North Carolina red maple and Virginia red spruce, is cut and harvested locally by him.

It is stored and air dried for a minimum of four years before working the wood into a fiddle.

Mike traces his interest in string instruments back to his childhood. His great-grandfather played the fiddle and his mother played classical music when he was a small child. “I heard so much violin music as a small child, I think it had an impact on me,” says Mike.

His interest in carving started at 5 years old with a bar of soap. Eventually wood became his material of choice and he took up making bowls and spoons. But he craved a challenge that would keep him striving and learning in his craft. Mike has been carving string instruments for decades now and he mentored with the late legendary luthier, Arthur Conner, of Copper Hill, VA.

Fiddlemaker Mike has a longstanding tradition of sharing in the love of music by giving away one of his handmade fiddles to a young North Carolinian between the ages of 10 and 17. The prize is awarded based on a 300-word essay submitted by each entrant. Two times he has given away two violins because sometimes the essays are so good, he can’t pick just one.