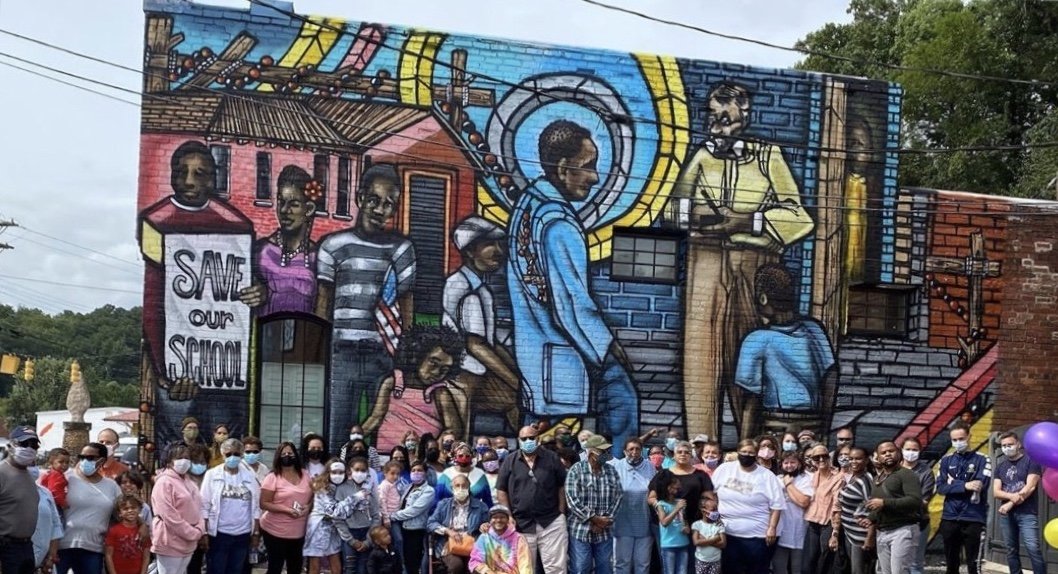 "What Happened to Our School?"

Recently I happened to receive an invitation to the virtual film release of a documentary on the Old Fort Mural “What Happened to Our School?”. It piqued my interest and I accepted. The premiere night arrived and I clicked in to the event. I met the most amazing people who were responsible for making this vibrant mural happen and bringing a piece of history forward for all of us now to contemplate and understand. The story of Albert Joyner, Sr. and George Sandlin and their effort to fight racial injustice is inspiring. I needed the reminder that personal courage is how change really happens.

The mural project and subsequent documentary film came about as the group says, “because a community member came up with the idea and suggested it, then others got together to discuss how they could make it happen, including organizing folks to work on various aspects and raising money. This is possible for any community, anywhere.”

Through their experience they developed a great guide for developing your own grassroots collaboration. If you would like some guidance regarding how to launch a successful community effort, the ‘Shift Happens Tool Kit’ may be useful a guide for you.

Credits for the documentary go to respected documentarian John P. Kennedy and six-time Emmy winner David Saich. Both are based in Asheville, North Carolina. Mural artist Don Rimx is based in Florida, but travels extensively to create his art. And thank you to musician David LaMotte for hosting the film release and sending the invitation.

Since then, I have had the opportunity to visit Old Fort and see the mural for myself. If you happen to visit the area, I heartily recommend checking it out. It is beautiful!